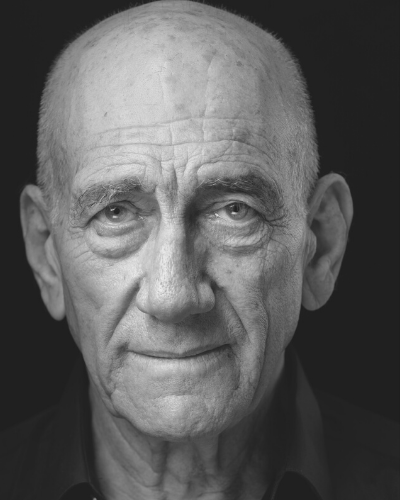 Ehud Olmert served as Prime Minister of the State of Israel from 2006 to 2009.

Born in Binyamina in 1945, Olmert studied at the Hebrew University of Jerusalem and worked as a lawyer.

He was first elected to the 8th Knesset in 1973 at the age of 28 and was reelected eight times. In 1993, Olmert was elected as Mayor of Jerusalem and led the city through the difficult years of Palestinian terror attacks.

In the March 2006 elections, Olmert led the Kadima Party to victory and was elected as the 12th Prime Minister of the State of Israel.

During his time as Prime Minister, he led the country during the Second Lebanon War which re-established Israeli deterrence giving Israel quiet on its northern border for over a decade. He also worked towards a peace agreement with the Palestinians and in November 2007, attended the Annapolis Peace Conference led by President George W. Bush.

Throughout April-September 2007 PM Olmert led the complicated and sensitive operation to destroy a military nuclear reactor that was built secretly in Syria. PM Olmert ordered to destroy the reactor days before it became operational.

At the end of 2008, in response to ongoing attacks on Israel, Olmert ordered the launch of Operation Cast Lead in Gaza.

In his different capacities, throughout his political career, and mainly as the minister of industry and trade, the minister of finance, and as the Prime-Minister, PM Olmert promoted Israel`s hi-tec industry, and made sure that Israel will become and stay a `start-up nation`.

Olmert recently published his autobiography in which he wrote about the conspiracy that he and many in Israel believe was supported and financed by right-wing circles in the United States and their counterparts in Israel in order to prevent the peace agreement which Olmert and Mahmoud Abbas were very close to concluding.

Olmert continues to promote efforts to end the Israeli-Palestinian conflict. He currently heads a private consulting practice and enjoys spending time with his wife Aliza, their five children and 12 grandchildren.