‘London Is Open’ is a three-part series from Cannabis Europa and Prohibition Partners, exploring the promising opportunities for successful medicinal cannabis and CBD companies listing on the London stock markets this year.

Companies Looking to List: Why London, Route to Market, Expectations?

On 18 September 2020, the UK’s Financial Conduct Authority (FCA) updated its guidelines regarding cannabis-related businesses (CRBs) looking to float on the London Stock Exchange (LSE). The UK’s financial regulator announced that UK-based medicinal cannabis and CBD companies are eligible to float on the LSE as long as they hold the appropriate Home Office licences.

The update mentions that overseas licensed CRBs may also be admitted to the Official List as long as their operations and activities are deemed legal under UK jurisdiction. Although the updated guidelines are subject to further consultation, the announcement is a big step for the cannabis industry.

It opens up the opportunity for CRBs to join the largest stock exchange in Europe, thus providing companies access to large amounts of capital and providing investors with more opportunities to invest in the exponentially growing cannabis industry.

Unlocking the Potential of the London Stock Exchange

As one of the world’s oldest and largest stock exchanges in Europe, it is no surprise that a listing on the LSE is an incredible opportunity for the cannabis industry. The LSE is one of the most international capital markets, holding 1,125 companies from more than 100 countries, culminating in a combined market cap of £3 trillion.

The stock exchange holds the FTSE 100 Index and offers companies excellent visibility and essential media coverage to gain traction. In 2020 alone, the LSE raised £37.4 billion with 34 companies listing on the stock exchange, of which 17 were from abroad. In the past five years, the average sum of money raised at initial public offering (IPO) amounts to £208 million, reflecting a tremendous opportunity for overseas CRBs to raise capital.

Although a listing on the LSE’s Main Market may intrigue CRBs, firms must comply with the onerous listing requirements that are set by the FCA, including but not limited to: a minimum market cap of £700,000; at least 25% of the company’s shares must be publicly floated; and they need a vetted prospectus by the UK Listing Authority (UKLA).

Currently, a few companies related to the cannabis sector are listed on the LSE, including Zoetic International, a vertically integrated CBD business with operations in the UK and the US, as well as Imperial Brands and Associated British Foods, who both hold subsidiaries that operate in the cannabis or hemp sector.

What other London Markets are out there?

Coincidentally the LSE also holds the Alternative Investment Market (AIM), which is a capital submarket tailored to small and medium-sized companies.

AIM currently holds around 850 companies with a combined market cap of £104 billion. Similar to the LSE, the advantages of joining AIM include increased visibility, access to a deep pool of investors and a broadening of the firm’s shareholder base. As AIM is tailored to smaller growth companies it has lighter regulations compared to the LSE Main Market, as there is no minimum market capitalisation requirement, no prescribed amount of shares for public floatation, and admission documents do not need to be pre-vetted by the UKLA in most circumstances. 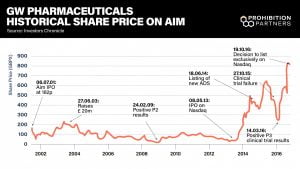 Today, GW Pharmaceuticals is one of the largest pharmaceutical cannabinoid-based companies in the world, boasting a market capitalisation of US$4.56 billion through strategically placing itself on London’s capital market early on.

Although the announcement by the FCA is big news for UK capital markets and the medicinal cannabis industry, the nation has already seen several listings of CRBs on the Aquis Exchange (AQSE).

The AQSE is a pan-European stock exchange based in London, which currently has CRBs such as Sativa Wellness Group, Greencare Capital, Freyherr International and Ananda Developments listed on the AQSE Growth Market. The AQSE Growth Market is similar to the LSE’s AIM as it provides growing companies the access to retail and institutional investors; however, it has less barriers to entry, making it an attractive market for early-stage CRBs. 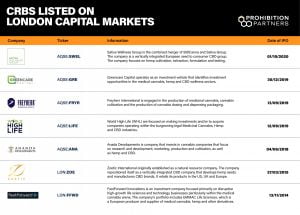 The announcement that the LSE Main Market will allow listings of UK and overseas CRBs has not gone unnoticed, with various industry leaders expecting to list on the international capital market very soon. We can expect more entrants on the London markets, even a potential for international companies looking to structure a dual-listing as it provides them with greater visibility, liquidity, and capital from UK and European investors.

Spinnaker Opportunities, a cash shell/special purpose acquisition company (SPAC) listed on the LSE, which initially focused on leveraging a reverse takeover with an energy- or industrial-related business, has shifted its priority towards the cannabis industry. In September 2019, the Israeli medical cannabis company Kanabo Group announced the pursuit of a listing on the LSE through a reverse takeover of Spinnaker Opportunities.

Chairman of Spinnaker Opportunities Andy Morrison told Prohibition Partners: ‘The listing will provide additional capital, which will enable Kanabo to continue to invest in the development of its formulations and vaporisation delivery devices and, in building its sales and distribution network, will bring its prescribed medical products and over-the-counter CBD products to more patients and users.’

Andy Morrison mentioned that ‘a listing in London offers cannabis companies access to a deep and liquid pool of capital that is rivalled by few financial centres around the world. London has lagged behind other global centres in the listing of cannabis companies, and this has created an imbalance between pent-up investor demand and the limited supply of high-quality public company vehicles in which to invest.

MGC Pharma, a European-based biopharma company, focused on developing and commercialising phytocannabinoid derived medicines, is one of the players that worked with the FCA to allow companies in the industry to float on the London capital market. MGC Pharma already trades on the Australian

Securities Exchange (ASX). In September 2020, the company announced it was preparing to list on the LSE, accelerating ahead to position itself as one of the first medicinal cannabis companies to list on the UK’s primary market. The company is taking a dual-listing approach to broaden the investor base for its European operations as well as investors from the Middle East and Africa. The admission on the LSE will allow MGC Pharma to raise capital to meet costs for a Phase Three clinical trial of its ‘ArtemiC’ formulation, which seeks to improve the clinical recovery of COVID-19 patients. In December 2020, the company reported a 100% success rate in its Phase Two study.

MGC Pharma Vice-president of business development and international relations Ron Lipsky said: ‘This is a process we’ve been engaged in for around two years, where we saw the UK market as a very viable place to establish a European market presence. We’ve been looking for opportunities to list in closer markets, and the LSE has always been something of a paragon. It is a very respected market, as London is considered a hub of international finance.’ Ron Lipsky continued to say that ‘we want our products to be provided by the NHS and insurers globally.

The UK is a good example of a public health system that can support coverage for our products. Once they are accepted by the NHS, the UK instantly becomes a very compelling and interesting market.’

All that Glitters is not Gold

As these announced listings have ignited hype around the LSE’s potential for the sector, it has also attracted less serious players towards the market who hope a listing will automatically usher success. Cellular Goods, a David Beckham-endorsed biosynthetic cannabinoid skincare producer, recently announced that it is looking to list on the LSE.

However, it has been discreet regarding its operations, and none of its products are available on the market. The company announced that it hopes its IPO will raise £8m so it can finalise its product range. Still, early IPOs like these can be detrimental for companies as the regulatory risks, costs and change in structure involved may have severe negative impacts, leading the company to fail on the market.

Investors are Eager to Join the Sector

During the Prohibition Partners Live November 2020 Conference, Head of UK Primary Markets for the LSE Marcus Stuttard and Senior Associate at DLA Piper Dylan Kennett held a live panel regarding medical cannabis on the LSE.

The panel discussed the recent FCA guidance, the legal requirements for overseas companies looking to list and the investor conditions of the market. Marcus Stuttard from the LSE stated that the London market has a ‘very deep pool of institutional capital that is available in London’ and continued to say ‘ recognise the growth opportunities and the potential in this broader sector, and I think absolutely that there is some pent-up demand to invest in the right business’.

The time for medicinal cannabis companies to list on the London exchanges is ripe as the capital markets provide companies with necessary capital, awareness and visibility in the growing European cannabis industry.

In the next issue of London Is Open, the series will examine the regulatory, legal and compliance measures that CRBs need to be aware of to ensure a successful listing on London’s capital markets.

Prohibition Partners unlocks the potential of cannabis through data, intelligence and networking. We provide strategic solutions to an international client base of investors, operators, blue-chip companies, FMCG brands and government bodies.

Prohibition Partners’ experienced consultancy team can offer cannabis-related businesses intending on floating with the essential information and strategic services needed to prepare for a successful IPO on the London Stock Exchange.